Mirage was a completely original concept in gay science fiction. It merged nonstop plot action with romantic male eroticism; realistically drawn characters with an almost operatic emotional intensity. Although there had been some attempts at gay science fiction previous to the book, nothing like this had been done before. Most of the books in this category either skirted the whole issue of gay sexuality and left it in the shadows; somewhere in the "unspeakable" background of the book-or made gay sexuality merely another example of bizarre foreign, futurist "decadence." Mirage did neither of these. Instead, the characters in the book are unapologetic about their gayness, and often it is their sexuality that advances the story, making it an important part of each turn in the plot. An example of this is the introduction of Robert Hetzak, a young man with AIDS who has been left to die by a group of violent gay bashers. Wright and Alan find him and nurse him precariously back to health. Alan soon finds that he is very much in love with Robert. But Alan knows that if Wright learns of this, Wright (or actually Greeland, the jealous hunter from Ki who on Earth only resembles Wright) will kill Robert. So Alan is completely torn between his passion-and compassion for Robert-and his duty to Greeland, the partner chosen for him for life on Ki. As part of their mission on planet Earth, the two men from Ki must take an Earth man back to their own planet. But to do so will be to condemn him to death on Ki. Alan does not want to do this to Robert, even though he is so emotionally tied to this handsome, vulnerable young man that he cannot bear the idea of leaving him on Earth when Greeland and Enkidu must leave their earthly bodies and identities behind and return once more to their "primitive" home planet. The book, like the characters in the story, operates on many different levels. It is both a political story, critical of American policies in the conservative Age of AIDS, and a romantic "coming out" story of Enkidu, a young man experiencing his first gay crushes and rushes. It deals with "urban sleaze," casual sex, the leather scene, etc., as well as innocent love, loyalty, and real compassion. Mirage is now close to ten years old and a true gay classic. Its many admirers and fans have followed the lives of Enkidu and his attractive, volatile lover Greeland all the way through the full trilogy of Mirage books that came to later include Circles and Albert or The Book of Man. However, each book can be read separately with tremendous satisfaction and delight.

On the tribal planet Ki, two men - in the spirit of an ancient pact - have been promised to each other for a lifetime. But a savage attack and a blood-chilling murder break this promise and force them to seek another world where imbalance and lies form Reality. This is the planet known as Earth, a world where they will use and escape.

"What we've got here is four characters in two bodies... a startling historical perspective on sexual politics... intelligent and intriguing."

This new science fiction novel, Mirage, raises the genre to a new sensuous level, which is no surprise coming from the author who penned Sex-charge, a wonderful compilation of his poetry. ...This male erotic, humorous novel shows how fickle the realm of love can be. Greeland and Enkidu are promised to each other in an intergenerational match making that shows up the flaws in that kind of system. Enkidu has really little to say in the arrangement. As you would expect, he falls for someone else whom he can love more freely. ...This work will be welcomes by gay Star Trek fans! 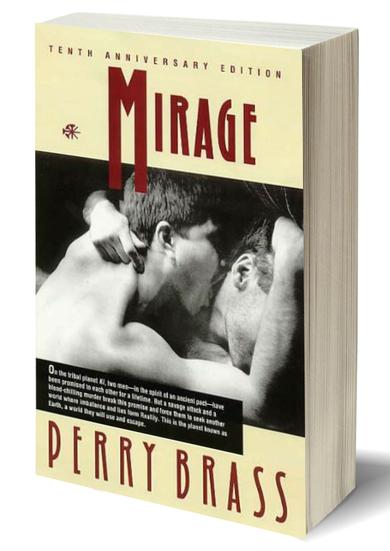