We all have our literary heroes. I have several: Edmund White, Christopher Bram, Felice Picano, Andrew Holleran and Perry Brass are authors for whom I will stop whatever I am doing when I hear they have new books out. Not only do I get good stories but I get lots to think about and for me, this puts them a rung above the others. I love a book that forces me to consider who I am and my purpose in life. Thinking is perhaps what makes us different than other species but stop and think about how many LGBT writers have caused you to think about yourself and about what they have written.

So much of this book rang true for me and so much of it I also experienced. I have always wanted to write about it but Perry Brass has beaten me to it and has done so in eloquent and beautiful prose. This is not a short book but I sat down to read and did not stop until I all devoured all 360 glorious pages. I laughed and I cried but most of all I thought and I remembered how it was growing up in one of the most turbulent periods of American history when communities tried to come together. I think we forget sometimes America is a melting pot of many different groups . . . Will we ever see a day when we can all sit together and eat from the same pot? I don t know and I doubt any of us do but we can all hope that there will be a day like that. Accepting ourselves is part of it all and Perry Brass helps us with that in his brilliant new book. Now back to read it all over again.

Click here to listen to Perry read from Chapter One of King of Angels.

Set in the haunting, enchanting landscape of Savannah, Georgia (of Midnight in the Garden of Good and Evil fame), during the tumultuous early 1960’s (the Mad Men era), King of Angels differs greatly from most novels with an LGBT theme: it is about a significant and extremely compelling relationship between a father and son—told from the bond that both father and son feel, despite differences in generation, the many secrets that separate them, and barriers of temperament but not of basic character. This nourishing father-and-son relationship is something many gay men (as well as straight men) seek, but it has been sadly missing, and missed, from most literature.

King of Angels explores this bond as part of a re-examination of the male gender and role. As Benjamin Rothberg, the half-Jewish, 12-year-old protagonist of King of Angels says about Robby Rothberg, his very tragic but heroic Jewish father, he was the “closest thing to a brother I’d ever have, even though I didn’t know it then.”

King of Angel’s other big theme is found in Holy Nativity Military Academy, a Catholic military school in the Savannah, run by a progressive, secretive, but compassionate order of monks. So the novel examines Southern Catholicism at the advent of Vatican II, the difficult position of the Southern Jewish community, the explosive civil rights movement of the era, and an emerging gay community first coming into itself out of the complete darkness—all at a moment when each of these groups was experiencing great change and pressure for understanding. 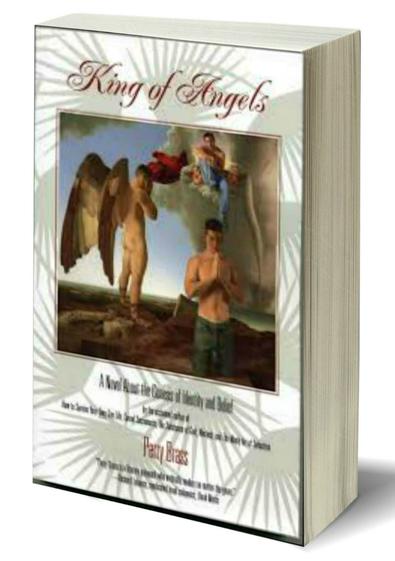