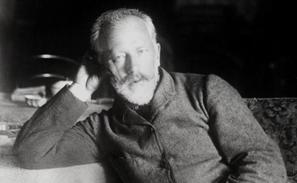 I have a terrible confession to make. For years and years, I have been hopelessly in love with Peter Ilyich Tchaikovsky. I cannot even remember when it started, way before I knew
anything about him—perhaps it was the first time my mother took me to the ballet in Savannah, Georgia, when American Ballet Theatre would hit town on one its yearly pilgrimages through the South, or the remains of the Ballets Russe would make a similar stop.The program was almost always the same—in fact, in a recent, wonderful talk the filmmaker Wakefield Poole did at the Donnell Library in New York, he explained it. Before he became a “pornographer” as he proudly calls himself, making the groundbreaking Boys in the Sand, with Casey Donovan, he was a young ballet dancer, touring with the always-touring Ballets Russe de Monte Carlo. “We always did the same ballets, to save scenery and costumes. There was ‘Graduation Ball,’ ‘Gaite’ [for‘Gaite Parisian’] and the third act of Swan Lake.”

He went on to explain:

“The third act of Swan Lake made me know I was a dancer. All I did was stand there and
move my arms a bit, but just seeing all those dancers in white with the blue light around them made me know that I was doing something very special and wonderful.”

Well, that did it for me, too. Just being this child in the audience (I think I was maybe eight or nine), and seeing this absolute magic floating on the stage—I was hit. I was smeared. I was . . . I was absolutely intoxicated with ballet and Tchaikovsky. I wanted to live inside it, and him. That feeling continued in my life, decade after decade, and I still have it. I cry my eyes out at the last act of Swan Lake—it has nothing to do with the story, but the fact that he is watching it, too. I’m sure of it. This handsome Russian man with all of his imaginative power, delight, and wit is watching every single performance of it. I'm sure of it. I felt that way before I knew anything about him when he was only some strange name most people can not spell, and his life seemed so remote as to be untouchable.

There are, I am sure, two Tchaikovskys: one is the popular composer who wrote all those
engaging, marvelous ditties from The Nutcracker Suite and Sleeping Beauty, and lots of other music that seems almost destined to be lampooned, ridiculed, by a lot of highbrow critics, and even labeled as throw-away. But the really smart people will have nothing to do with that. The genius choreographer George Balanchine said that Peter Ilyich was the world’s greatest composer for ballet, and if anyone knows, Balanchine should. Yes,the smart people know that even under some of the sillier things he wrote, there was this brooding intensity; but under the other things—Tatiana’s fantastic letter scene from the opera Eugene Onegin, for instance;the Little Russian Symphony, among so many others—an emotional storm is unleashed and working. You are completely inside him and beside yourself. He has found the perfect expression of everything he could not express.

Then there are other things, like the wistful waltzes in Swan Lake, that seem so simple as to be simple-minded, but which truly haunt you. You realize inside them is the sadness of men who can never have what they want. And that was Tchaikovsky’s own sadness. He was gay—to use one of our many names for this—at a time when being that way was hell. It was knowing you were what was unnamable; it was knowing you were never going to be able to go, freely, inside that deep romantic heart of yourself and bring back the gold of your own feelings and lay it openly, kindly, at the feet of another man.

This was peculiar, too, in the fact that Tchaikovsky was so Russian and so loathed by so
many of Russia’s other composers, because they felt that his never discreet enough
homosexuality in their closed but gossipy society was an insult to a country trying hard to re-identify itself only a few decades before the Revolution exploded it. For two hundred years, Russia’s upper class had been under the dominance of French and English culture. It was impossible to be among the elite and not speak and write fluent French and adequate English—then Victorianism, from both sides of the English Channel, was considered the arbiter of the high taste. There were still the wild, hyper-religious masses of Mother Russia, but the enlightened upper classes rejected them as boorish for French or English refinement.

Countering this was an attempt at a "real" Russian music and culture based on folk tales and songs, coming from Nikolai Rimski-Korsakov, Alexander Borodin, and Modest Mussorgsky.They wanted a hairy-chested, back-to-the-people, two-fisted Russianism, and Peter Ilyich’s very existence represented a spit in the face to that. He was too “light”; a pansy with gossip swirling around him. He was drawn to younger men—sometimes servants, sometimes men of his own class—and as much as he tried, through a disastrous false marriage, to hide it, this attraction dogged him.

In 1891 he sailed to New York to open Carnegie Hall. He was one of the world’s most famous
composers, and I keep wondering, would he have been happier in New York if that could have been possible? New York was known to be a more open city than most of Europe. It had a fairly accessible underground gay culture. But it was impossible for him to stay. He came back to Petersburg, and died there, in 1893, of cholera—and the question has always been, , did he willingly drink a glass of water that was contaminated with it? Did Peter Ilyich kill himself in this almost untraceable way, or was he forced to kill himself, as the only way to keep gossip about him (and possible blackmail) from emerging, in the way that it broke out and destroyed Oscar Wilde?

This question has been asked over and over again; Ken Russell in his way- over-the-top
Tchaikovsky movie starring an unbearably handsome young Richard Chamberlain, The Music
Love gives us the idea that he was forced to do it. This was so, even though his brother Modest, who was also his manager, was known to be "queer as the proverbial goose," but able to stay in the background.What brought me back to Tchaikovsky was reading the Rev. Mel White talking about his own “engagement” with of all people the loathsome Jerry Falwell, who I’m sure would have forced poor Peter Ilyich to drink that water at the drop of . . .anyway, it was so terrible reading Mel White talk about himself in these words:

“After I put myself through exorcism, electric-shock therapy, Ballanchine’sthen slitting my wrists, and going to the hospital, my wife finally said, ‘You know, you really have a life of your own. I like gay people, but I just didn't want you to be one.’ Eventually I met and fell in love with Gary Nixon, and as soon as I realized that my sexuality was a gift from God and got over my fear and guilt, I wrote Stranger at the Gate, in which I told the leaders of the religions right that they are doing terrible damage and they must stop.”

Unfortunately, Peter Ilyich did not get that chance. But every time I go to the ballet and see Balanchine's Serenade, or at Christmas, when I hear the Nutcracker, I think of him, and imagine this handsome man sitting next to me, reaching for my hand.