Circles, the sequel to the gay science fiction thriller Mirage, returns to primitive planet Ki, where Same-Sex love is normal to life. Enkidu, the cast off mate of the ambitious hunter Greeland, is now hunted himself. Escaping to Earth, alone, in a riot-scarred Los Angeles, he takes on the identity and body of married, closeted Nick Lawrence, and as Nick finds a new partner who will do anything for him-including kill. On Earth, Enkidu must save the lives of all those he loves, especially the tortured Nick, whose handsome face and turbulent fate he now inhabits. We thought the plot elements to Circles were even more exciting than those in Mirage. It is one of those examples of a sequel being even more exciting than the original, because the characters have had time to develop. Besides the inner turmoils so constant in Perry Brass's books, we also witness the increasing tension between Enkidu and Greeland, and the development of Enkidu's new love interest on Ki, Greedu, who is both enraptured with Enkidu and terrified of the consequences of their love. On Earth, Brass gives us another wonderful assortment of characters, most especially the confused, schizophrenic Nick Lawrence, whose body Enkidu takes over, and Reuvuer Svoizhe-both a brilliant Russian mathematician and a diehard Tom Cruise fan-who becomes even crazier about Nick. In the middle of all this is vampire-esque Woosh, the "monkey man," the sinister wizard who controls the clan of the Blue Monkeys. Woosh arranges Enkidu's second escape to Earth, then tries to destroy Enkidu, Nick, and, of course, Greeland. We will not give you the outcome of the story, but just say that if you want the plot action and sexuality in your fiction to be hot, heavy, and WAY over the top, then Circles is a must read for you. Again, as with reading Mirage, you don't have to start the story at the beginning, but once you read any of the Mirage books, you will want to read them all.

"...like a shot of adrenaline to the creative centers of the brain."

"Brass' prose slides gracefully from down-to-earth plain talk to a richly metaphored language that recalls his roots as a poet...the world he has created with Mirage and its sequel rivals, in complexity and wonder, the fantasy creations of such greats as C.S.Lewis and Ursula LeGuin" 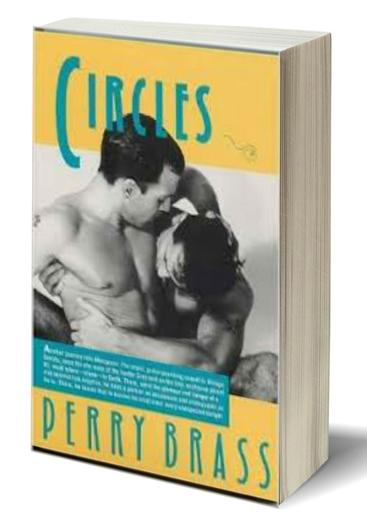