“Layered with philosophical elements, fascinating descriptions, and a clear focus on character overall, Brass's . . . work is one of the most unusual novels I've read in years,” Bay Area Reporter, San Francisco.

"Perry Brass has created a page-turning thriller that takes the reader on one helluva roller coaster ride, and oh, the places you’ll go!”

An Excerpt from Carnal Sacraments, A Historical Novel of the Future.

Carnal Sacraments, A Historical Novel of the Future

Here is the glimmer of the glimmer of an idea: a man who is kept young and alive by the job he has, and how he struggles to stay that way. It was going to be our over-worked, 24/7 lives now, telescoped into the future, into the year 2075. And so, like in any novel getting born, a series of images and feelings, just raw feelings, came to me. Then characters, situations, plot—and the the life itself of the book. That thing that makes a book come alive—action, all sorts of actions, connecting human feelings to that most important of all questions in fiction: What comes next?

No one would know his real age. Or how he felt inside. Or what he had to do to stay the way he was.

In the last quarter of the 21st century, Jeffrey Cooper, an Alabama-raised, executive design star living in Americanized Germany, has made a Faustian pact with the huge global economic system running the world. The system will keep him young and razor-sharp, as long as he can stay on top of do his job and keep profits high. But stress from work and the congested, hyper-competitive life around him is killing Jeffrey. Can he keep his stress level a secret from the system itself, his co-workers, and even his own seductive, "Daddyish" German therapist who has told him that, when all else fails, there are “angels” who can save him, and often we don’t know who they are?

But one will appear in Jeffrey’s life. At first, he seems to be the Devil himself, offering every kind of excitement, even offering Jeffrey back his own lost soul—but will this younger, mysterious and attractive man end up killing Jeffrey, or saving him?    In Carnal Sacraments, Perry Brass has created a parable of our time and the future, of an emerging international business culture based on war, and of intense sexuality as a key to religious experience and personal salvation. Author of The Harvest, Warlock, and Angel Lust, Perry Brass continues his exploration of the joining of sexuality, consciousness, and spirituality in this poignant and mature novel. 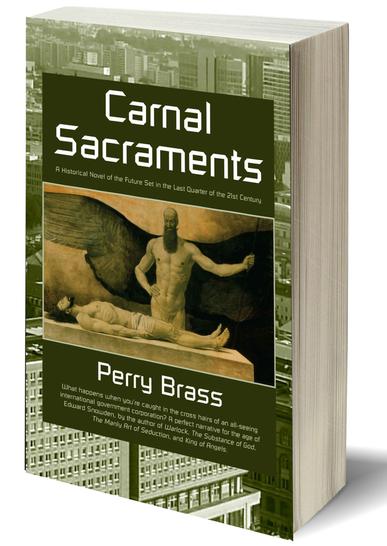 A white-knuckle suspense story set in the year 2075, the distant yet close-enough future, when constant corporate + government surveillance is Standard Operating Procedure. Endless war and endless “security” punch their way through individual lives. And your job level will determine exactly if and how you live and die. In a glittering city in a very internationalized Germany, Jeffrey Cooper, Alabama-born design star, has made a pact with the Devil himself. No matter what age he is, the mega-Corporation running the world will keep him looking movie-star young and handsome. Cooper has left his past, his history, and heart behind. But they will catch up with him when he meets a handsome young Dutchman who offers him his real soul back—but with even a higher price than the Corporation is making him pay.
A perfect tale for the age of Edward Snowden, the National Security Agency, and a world business culture in which many gay men have taken key roles and given up so much of themselves in return. Carnal Sacraments is a book you won’t put down until the very end.
This new edition has a Foreword by the author.