"Gay science fiction can tend towards the genre-ish-rewrites of old Heinlein plots with sexy gay space commander replacing the hunky straight one....Avoiding these faults with a depth of vision and a mastery of solid, vivid prose. Brass gives us a book where lesser writers would only have premise."

Albert:  The Book of Man

ALBERT or THE BOOK OF MAN

As a work of science fiction, rather than simply gay fiction, some readers may find Albert even more imaginative and thrilling than its predecessors. As we have said before, you don't have to read the Ki books in order, and some readers have actually started out with Albert and read back. In Albert, Brass introduces a whole new order of creatures on Ki, including several strange, very sexy hybrids of ape and semi-human beings, as well as Anvil, the power-hungry Off-Sexer who will have sex with anyone, and use everyone accordingly. Albert-like most of Brass's books-is very political, but the politics of the story never take over; it never becomes simply a political tract. Now that we seem to be living in a state of what Brass calls "corporate feudalism," the feudal aspects of Kivian life seem even more appropriate to our own. This is also, physically, a beautifully produced book, and readers have told us that they have really enjoyed every aspect of it.

Albert:  The Book of Man 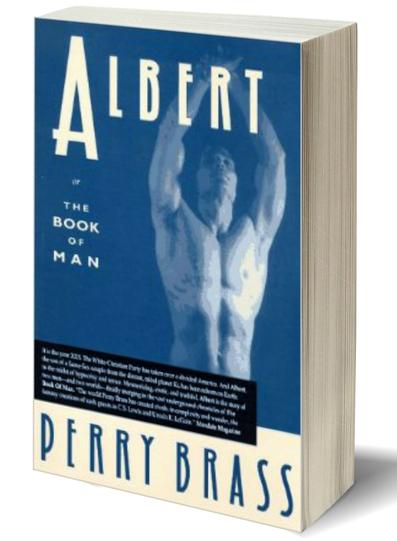 Albert or The Book of Man