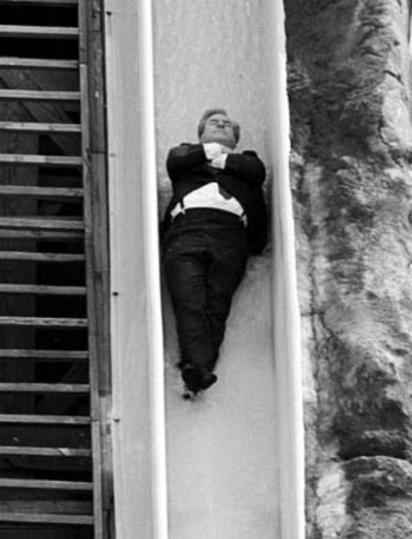 Of the Dead, Speak Only Good: Jerry Falwell is Dead

Falwell was an infuriating character, and I think a lot of the anger that is coming out now from the gay and/or progressive community is a logical extension of that. He had an amazing, homogenous stupidity: there were very few surprises that came out of him. It’s not like he had a good side, an endearing, kind, warm, charitable side. If he did, then these sides were certainly kept out of the “public discourse,” and the most that can be said of him is that he gave a face and distinctively repugnant voice to what a lot of close-minded Americans were thinking—that they had the answers, and the answers were simple, stupid, and usually what they had, too, had been taught by their families and parents.

But I think that there is another facet to the anger that is coming from Falwell’s death: that he actually instilled fear into the minds of a lot of gay men and women. That under that chubby, down-home, "Ya’ll come" exterior was a really vicious man, and he could get away with that viciousness in ways that someone like the current Pope, Benedict XVI, can not. Pope Benedict istoo transparently rigid, cold, and uningratiating. People may look up to him because he’s the Pope, but he’s not fooling anyone when he rails against homosexuality, birth control, freedom of choice, and all the other ills of “secularism.” But Falwell, whom one progessive said should go
straight to Heaven, where "he’ll be found lying between Santa Claus and the Easter Bunny," could come off on TV as the cuddly uncle, the country cousin who told it like it was: and that was scary. That was worse than the skinny man in a dress leading the flock.

This country is filled with anti-Catholic people who would still swallow every word Falwell said; they’d never believe the Pope, but they would “Amen” with Falwell all the way to the Inquisition.

My friend Steve Parelli, the executive director of Other Sheep, a group that helps lgbt people who have been harmed by the effects of religious fundamentalism, had this to say about Falwell's death.

" I am a gay evangelical in my mid-50s. When I heard of his death there was a bit of glee within me that I immediately began to put in check. But upon reflection, does not the abused rejoice at his abuser's demise, like the Psalmist of old? It is fitting that we who have suffered under his reign of verbal infliction can now rejoice that he is powerless to further spiritually abuse us. We rejoice, not that he has died, but that we, by virtue of his death, are free from his abusive, groundless rantings against gays."

You can learn more about Steve, his partner Jose, and the work of Other Sheep at
www.othersheepexecsite.com.